Artisan Baked Goods plus Vegan, Dairy-Free, Sugar-Free, Wheat-Free, Gluten-Free & Organic Treats.
The Alternative Baker ~~ a Hudson Valley bakery ~~ Where Taste is Everything.
PLEASE SEND ALL MAIL TO THE PO BOX. THANK YOU. 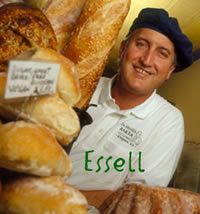 Although raised in coastal southern California by a grandmother and mother who were devoted to creating fine American handmade desserts and breads, the Culinary Institute of America in Hyde Park, New York is what brought Essell Hoenshell-Watson to the area. After a career in the art business working in galleries and museums, he decided to follow a creative career in the baking and pastry arts. Initially brought here to attend the Culinary Institute, the upstate area of New York is what attracted him to put down deep roots into the community. The bounty and beauty of the region and the proximity to manhattan was it for him.

The Alternative Baker started out as a wholesale bakery out of the Rhinecliff, New York home of Essell Hoenshell-Watson in 1996. With his car filled with ultra-fresh baked goods steaming up his windows, he travelled to craft fairs, food festivals, farmer’s markets and special holiday fairs, setting up his table of artisan baked goods. The owner/baker started the bakery after graduating from the pastry program at the Culinary Institute.

Moving to Kingston (the original capital of New York founded by the Dutch settlers in the early 1600’s) and then opening the bakery here in this little provincial town of Kingston, Essell wanted to create the kind of bakery that one finds in the villages of Europe--the bakery is the cement that holds a community together.

In keeping with these dreams and goals, the bakery functions as a neighborhood meeting place. It is a focus for the artists, writers, intelligent mechanics, workers and ex-city folks whose daily life includes a trip to the bakery for a hot sticky bun which has been described as “a direct throwback to childhood”.

Just like the sweet odors emanating from our ovens, our baked goods are made only with the most natural of ingredients~~our flours are not bleached or bromated (sometimes even organic), we use fresh shell eggs, whole fresh milk, unsalted butter without additives, pure olive oil or extra-virgin olive oil, canola oil--you get the idea.

The Alternative Baker (lemoncakes.com) is a traditional storefront bakery located in the town of Rosendale, in Ulster County, in the heart of the Hudson Valley in upstate New York. We specialize in lemon cakes (and lemon bundt cakes), which are widely renowned, as are all of our handmade traditional and alternative baked goods.